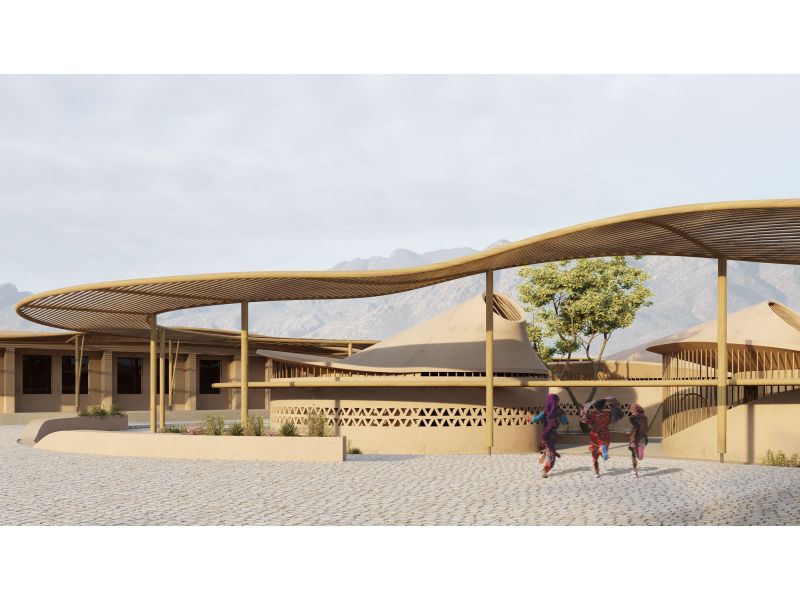 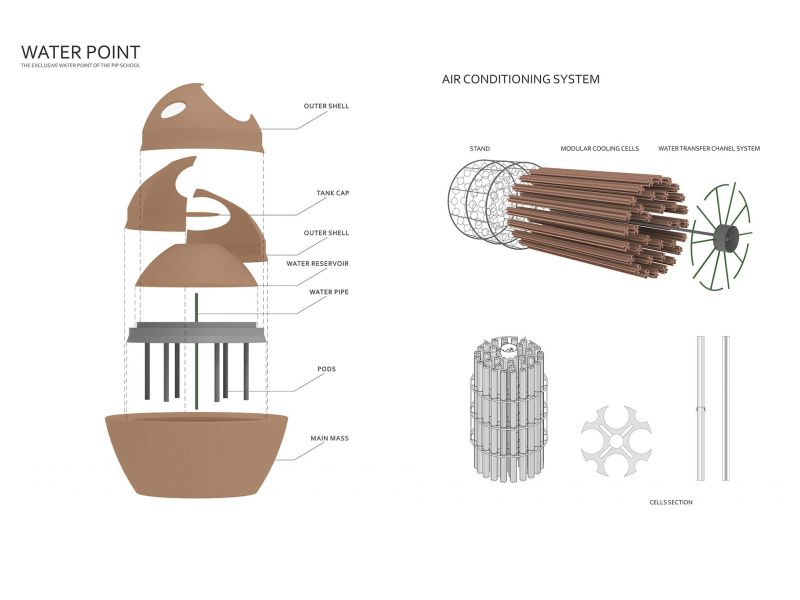 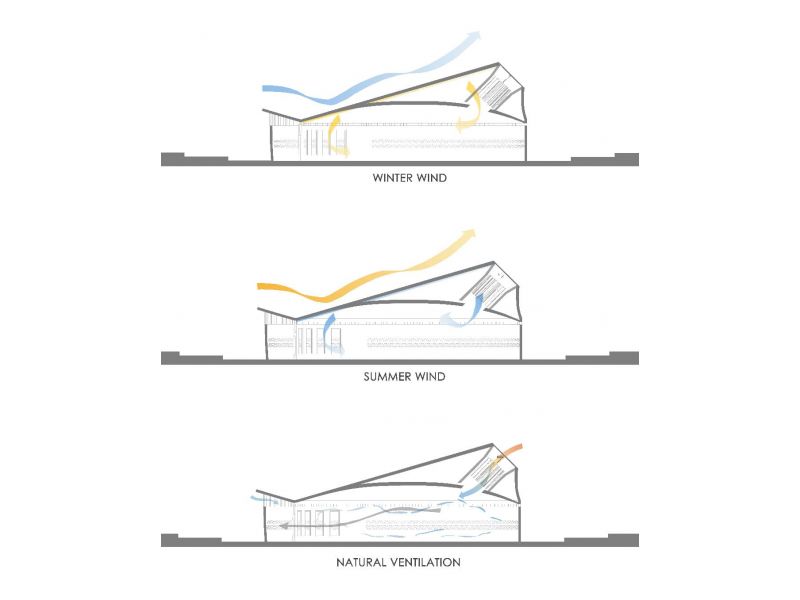 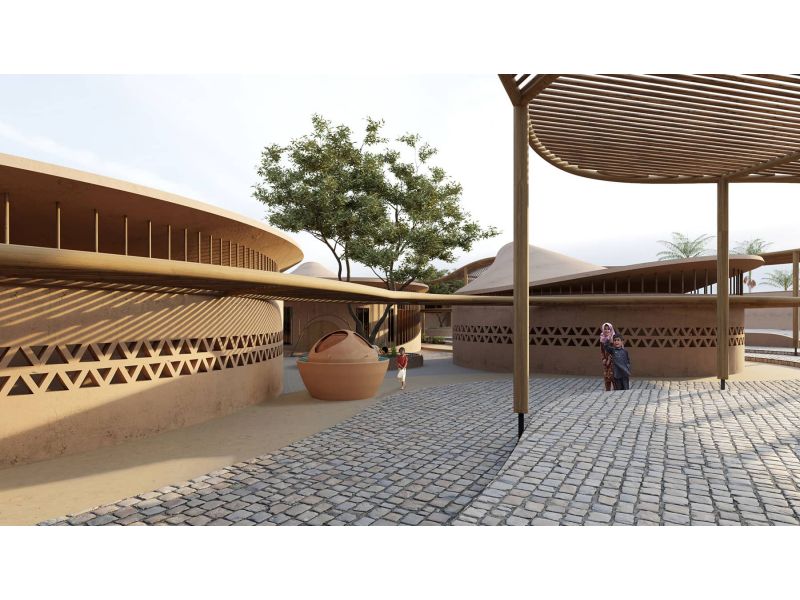 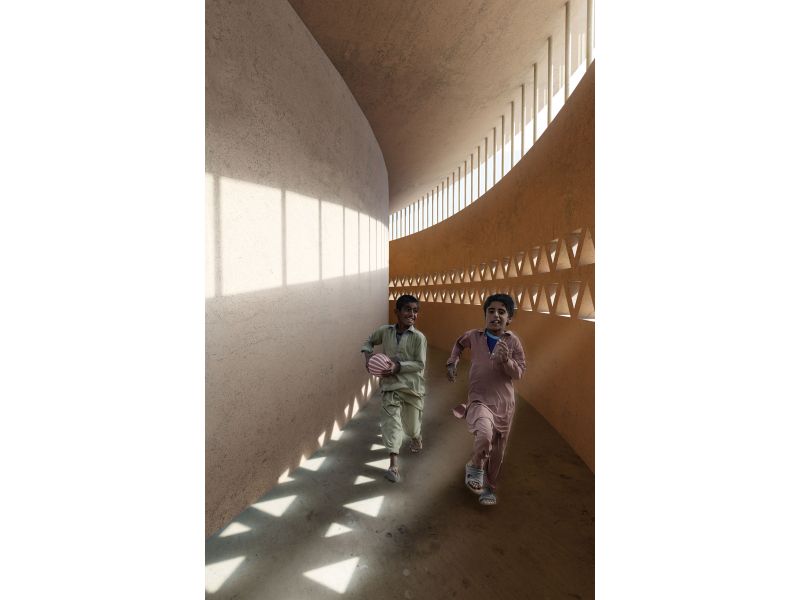 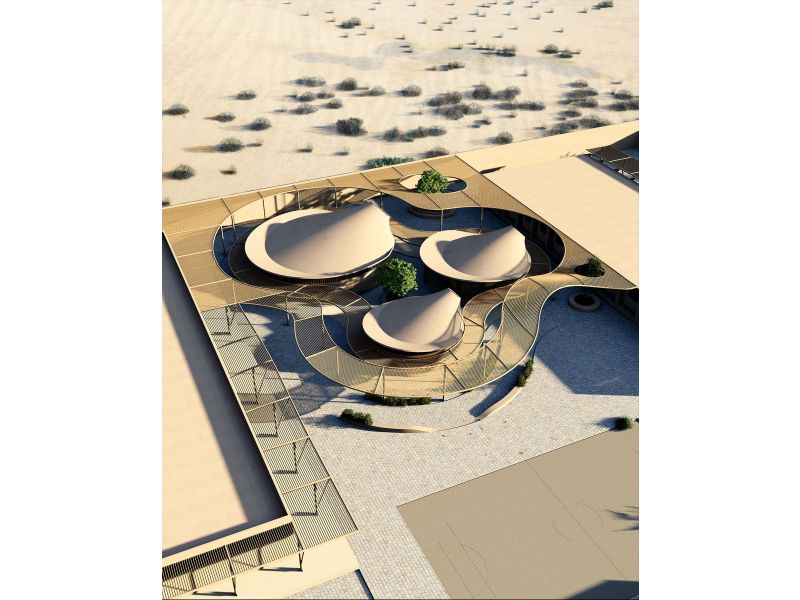 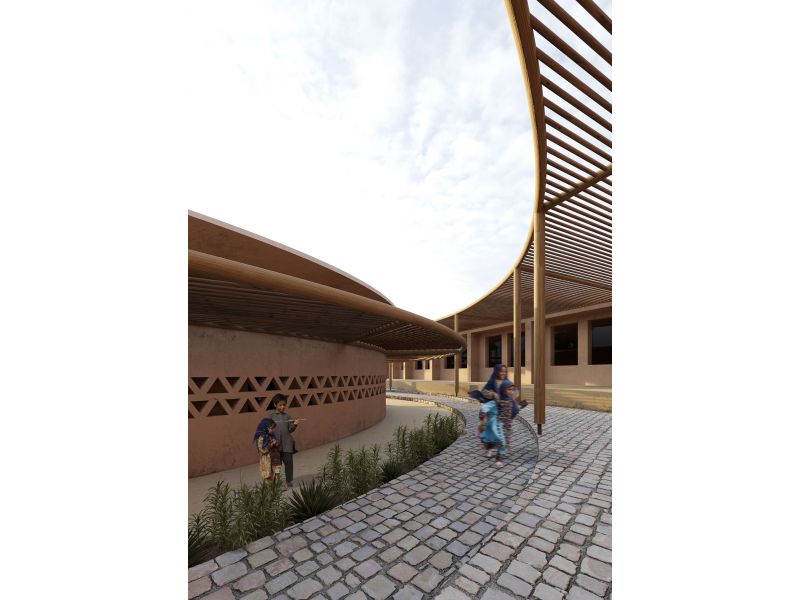 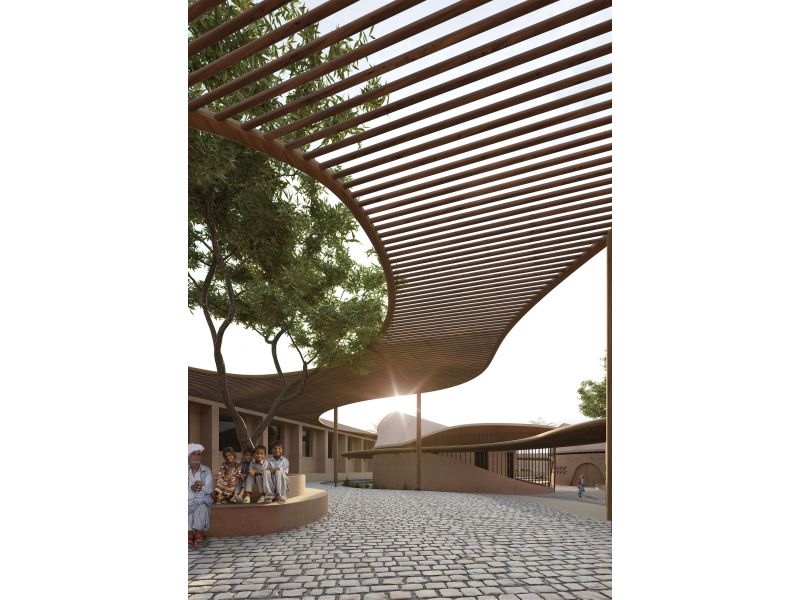 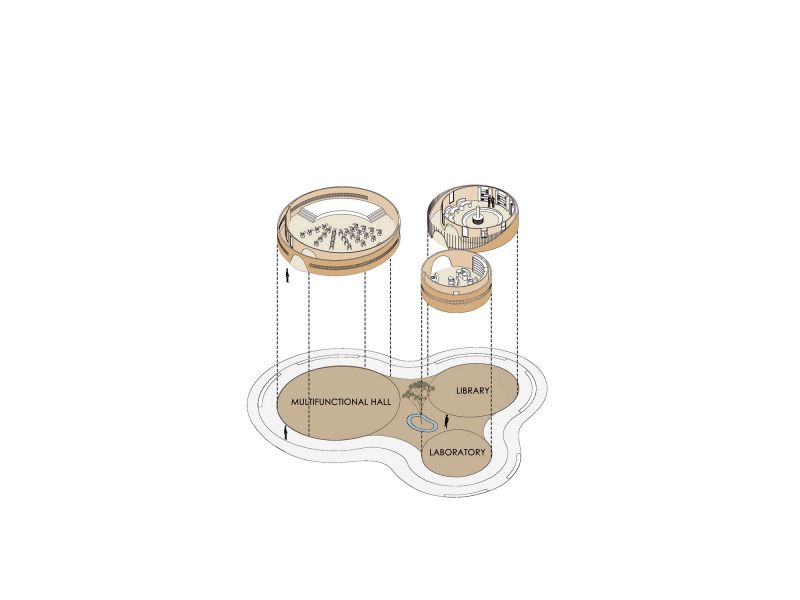 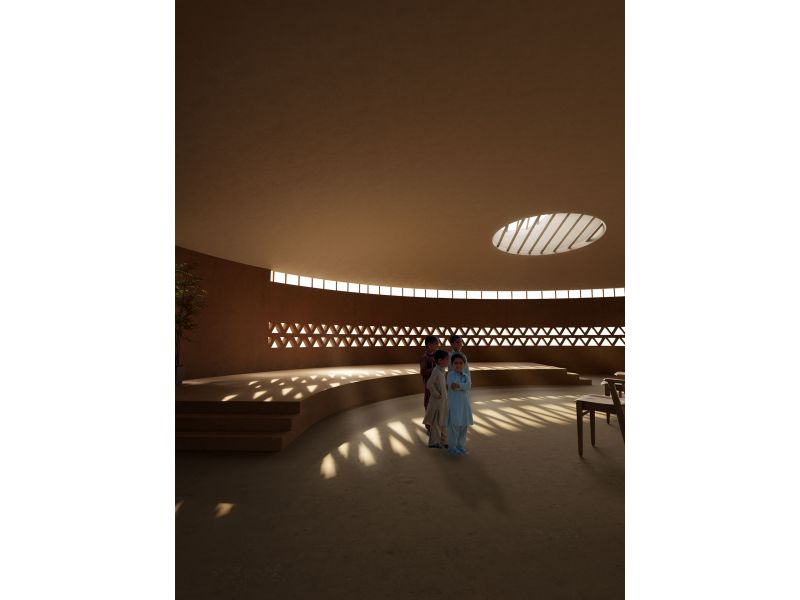 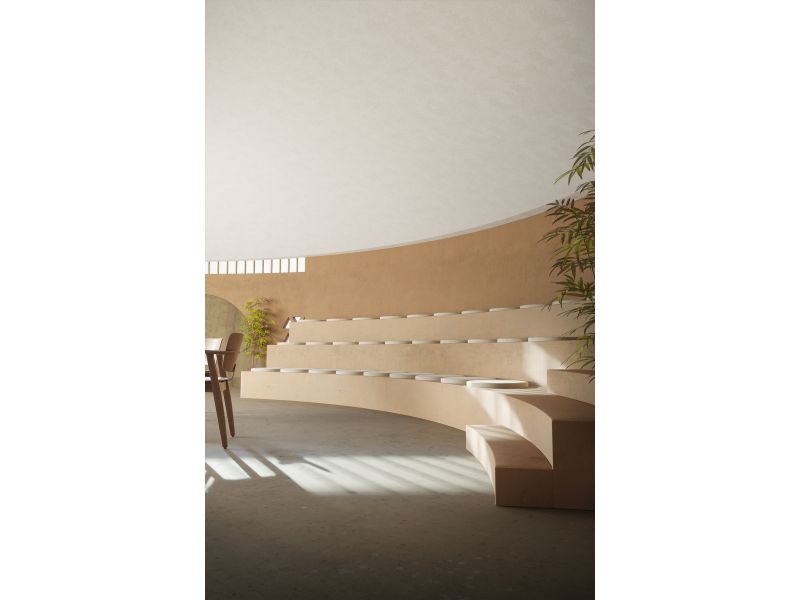 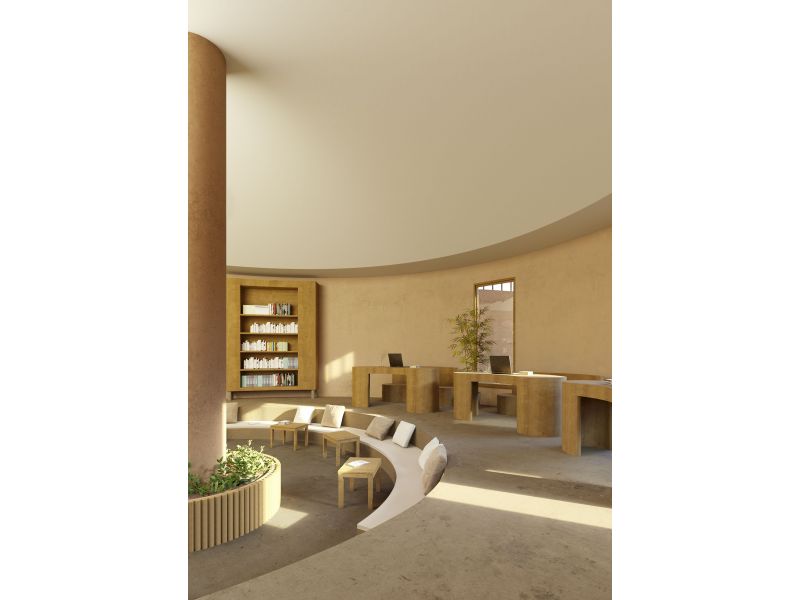 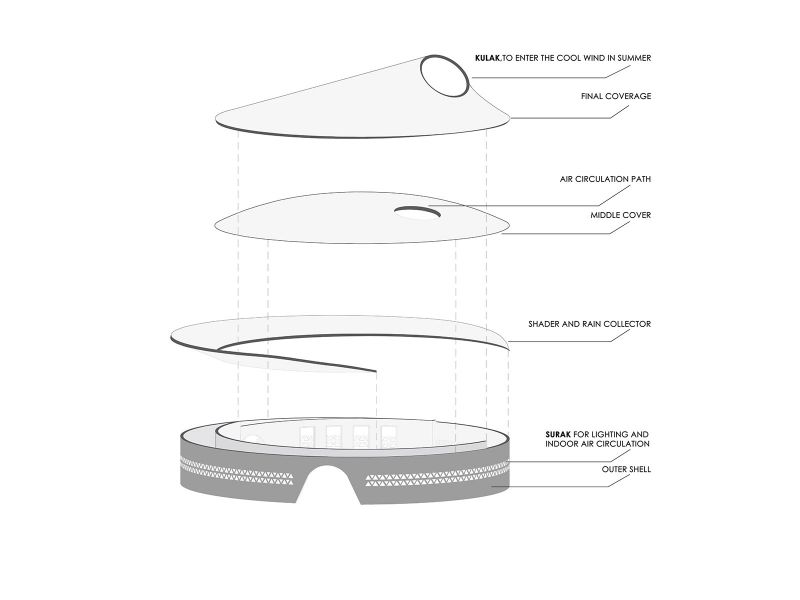 Previous Next
Pip School is one of the poor and deprived areas of Nikshahr city in Sistan and Baluchistan province. This deprivation has greatly affected various aspects including education. The aim of this school is to influence the nature, culture, art and native architecture of that region, and its features have been used in design and creating. The line of thought of the project of local form and materials, climate and nature of the region has been formed to create a sense of belonging in a space for creating knowledge.
The designed spaces that include (library, exam hall, laboratory) are different in terms of lighting, quality of space and visibility. The placement pattern and spaces are designed in such a way that you have easier access to the existing buildings. According to the location of the buildings, there was a middle space for most of the students.
In the end, the design of Pipe School was formed in response to human needs, climate and in line with Takht project, and its purpose is to improve education while preserving the native values ​​of the region.

The design idea of ​​the school originates from the climate, native nature of the region, vegetation and natural ventilation elements such as Kolak and Surak as well as Kapar form in Sistan and Baluchistan region. The school design model is based on modular geometry, which can be implemented in a short period of time due to economic constraints. In addition, the natural geometry of the region, native structures and existing house patterns are used in the facade and landscape design. According to the review of the students' requests, three separate buildings were designed, different from the previous buildings, and also to increase the quality of the existing buildings in the separate buildings.

The design of the form of the buildings is based on the architecture of the local building and the direction of the prevailing winds of the region. In order to create natural ventilation in the middle space of the building, the tree and the water pond are also used as a positive feature of elements such as Kolak and Surak to take advantage of the wind and sunlight.

The air cooling filter in Kolak consists of several clay cells which store water in themselves. Evaporation of water on the clay surface of the cooling cells leads to the creation of a cool atmosphere in the environment around the filter. As a result, the air passing through this area gets cooled.

This project was designed for free and charity by Keivani Architects Studio.

Keivani Architects is an award-winning Iranian international studio, was established in 2009 by two architect brothers Nima Keivani and Sina Keivani. The projects done by this studio are in different architectural spheres, including residential and commercial buildings, as well as the restoration of ancient monuments. Keivani Architects has already designed and implemented many architectural and interior design projects in the Middle East and Europe. In addition, their projects also were exhibited in architecture and design exhibitions such as the Design Museum of Como in Italy 2020, and modern & contemporary architecture of Iran in Tokyo contemporary museum May 2018, and GAP 2017 Melbourne University School of design and etc. they have won several prestigious international architectural awards and have invited to be a jury participant in international architecture awards, Their articles and architecture works have been published in many world-leading and famous journals and publications.

Keivani Architects’ practice has been concentrating on spiritual dimension of architecture, in which the creation of meaningful, enriched, and innovative spaces is remarked as a significant task. Relying on their theoretical and practical experiences, the design team utilizes up-to-dated methods and technologies to actualize the generated ideas, in which social, environmental and economic sustainability is in the core. Their creativity and ideas are usually influenced by regional culture and environmental circumstances, which in a global scale, make their practice novel, unique, and useful for human society.